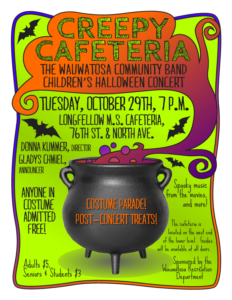 Now that October is here, the band is gearing up for their most favorite time of the year! No, not Christmas (yet)! We’re talking about our annual Halloween concert in the Creepy Cafeteria. You have never been to a concert band like this! Not only will there be the great music that you’ve come to expect from the band, but there will also be tons of stuff to keep the kiddos entertained. We have actors, sing-alongs, a costume parade, and even some activities right during the music! Loads of audience participation makes this concert one unique experience.

Here’s the music on our stands at the moment:

End of the Year Concert